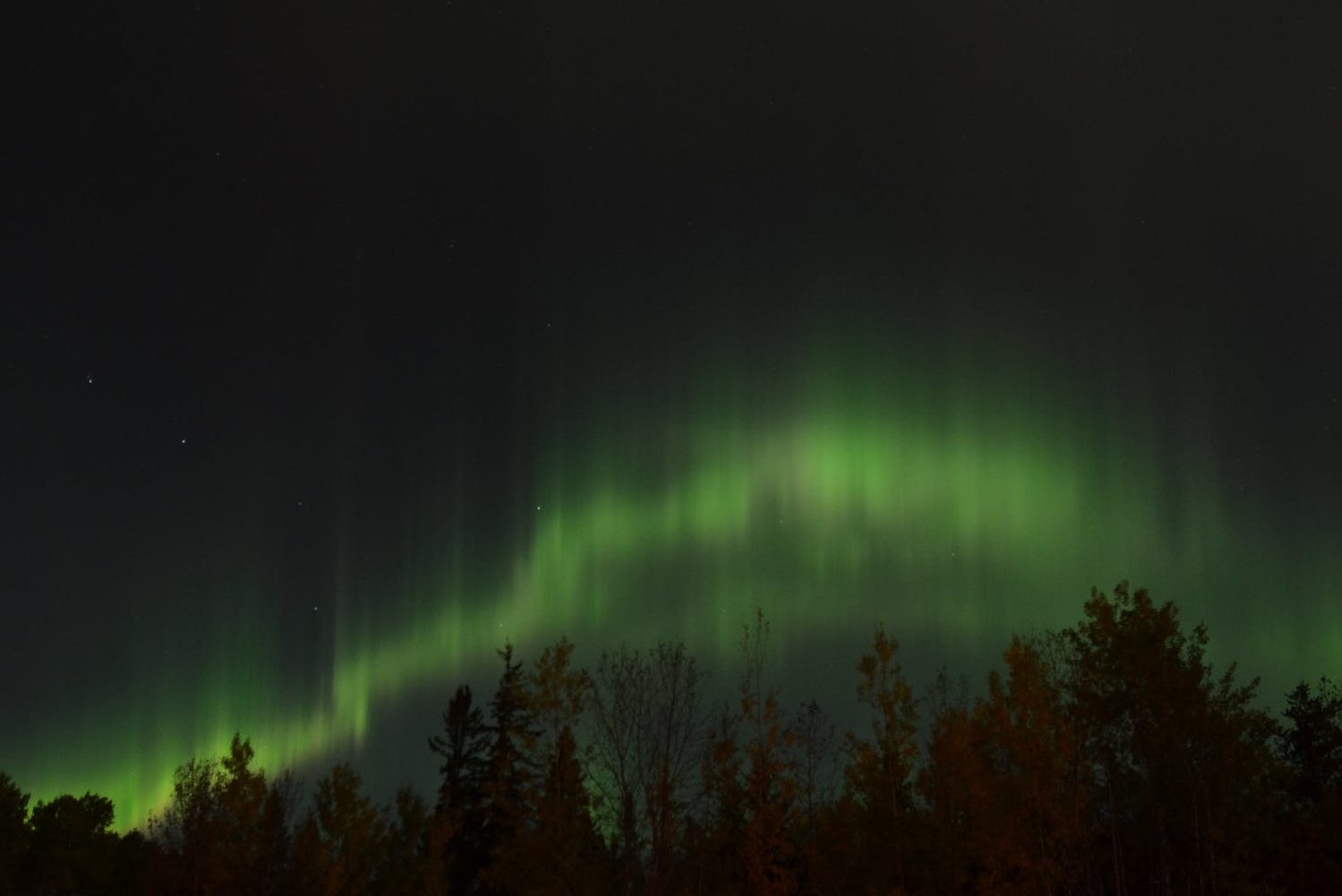 Global visitors come to the shores of Hudson Bay in northern Manitoba to view the Northern Lights. Their destination, Churchill, is one of the best-known places to do so on our planet after all. Its remote location means their claim to fame is true — the Aurora Borealis shimmers for 300 days each year.

Whether you are checking out the lights at the Churchill Northern Studies Centre or you’ve booked a tour, it’s a one-of-a-kind destination, made even more so when you add polar bears and beluga whales.

Yet, the Northern Lights can be viewed from across Manitoba (best in Fall and Winter), maybe not as frequently as our friends up north, but people from all corners of the province can enjoy the majesty.

All they need is a dark sky.

What are the Northern Lights?

Geomagnetic storms on the Sun expel solar winds towards Earth. The particles that reach us are captured in our magnetic field, and flow toward the poles, north and south. The Northern Lights are a clash of ages between the particles and the molecules in our atmosphere, followed by rapid temperature increase. Different atoms reacting with the sun’s particles creates the competing colours.

What does a new solar cycle mean for the Northern Lights?

The NASA and NOAA-sponsored Solar Cycle 25 Prediction Panel estimated that this cycle, now the 25th, is on the rise and will peak in solar activity in 2025.

This comes as the world left a solar minimum, the tail end of solar cycle 24, in December 2019.

Chasing the Northern Lights near Winnipeg

We’ll start with locations right outside the city. You may be lucky enough to see faint aurorae from within city limits, but, trust us, you’ll want to drive outside of Winnipeg for the optimal dark skies.

A birders paradise during the day, Oak Hammock Marsh can be an extremely busy area for Winnipeggers trying to see the Northern Lights. We must note, however, that the RCMP urge caution.

It is dangerous to park along the road and get out at any point, let alone at night-time. The police will hand out tickets. Long lines of parked vehicles can be a reality — if it’s busy, find a safer place to stop.

Nearby Birds Hill Provincial Park is also popular for astronomers. However, as both places are easily accessible, some people may wish to carve out a quieter part of Manitoba for their sky gazing.

PS: Keep your eyes on the road while driving, even if an amazing dance dips and dives above you.

Your best chance of spotting the Northern Lights will occur in rural areas. Consider traveling north into the municipality of St. Andrews. This past March, the lights were seen above Steinbach to the southeast.

One of the best areas to experience the Northern Lights, within reasonable driving distance from Winnipeg, is the Interlake region. In many instances, there’s little to no light pollution here, especially around the lakes. People have had success outside Gimli, including Hecla Grindstone Provincial Park.

Another reason to travel to the Parkland region

It’s a three-hour drive from Winnipeg, or a one-hour drive from nearby Brandon, yet the skies over Riding Mountain National Park are nothing short of pristine — perfect for catching the show. We’ve enjoyed some stunning images of the Northern Lights over Clear Lake, Moon Lake and Grayling Lake.

Plus, the resort townsite of Wasagaming has everything travelers and aurora chasers are looking for.

At 2,800 square kilometers of protected wilderness area, Whiteshell Provincial Park features numerous lakes — Falcon Lake, Caddy Lake and Westhawk Lake among them — and rivers. Set against the forests and awe-inspiring rock formations of the Canadian Shield, this is also a hot spot for the Northern Lights.